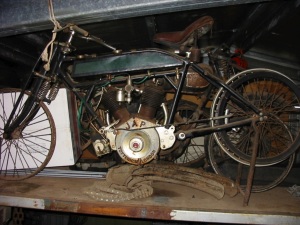 During the 1950’s Dad and I spent many weekends hunting around the Colac district in Victoria in search of veteran/vintage cars and motorcycles. A harmless obsession; we had virtually no money to spend, so concentrated on unwanted wrecks in the pious hope of restoring them to their former glory. This machine was one result of the quest.

I bought it in my schooldays, in about 1954-55 from a concrete caster, “Brickie” Anderson, who operated a yard in Colac manufacturing cement stock troughs, garden ornaments, etc. Through older relatives I had learned that his father had had an old bike and no-one could remember hearing of it being sold, so I visited him and enquired. Lo, and behold! The bike was still there!

His story was that his father – also a “Brickie” Anderson (“Brickie 1”, I suppose) – had bought the bike second-hand in about 1916 when he had a brick-laying job working on a large house outside town. “Brickie 1” did not get on well with the bike. Possibly it was he who bent the starting pedals around to hold a pair of extremely rough-hewn footboards wired to windmill bolts through the pedal boss and over the front engine plates. Due to the consequent lack of functioning starting pedals, he had to push the bike off and start it cold. According to his son, he often ran beside it some distance before it fired, then tried to leap into the saddle by swinging his leg over the bags of bricklaying tools tied onto the carrier. On occasion his foot caught in the tool bags and he hopped and bounded alongside until the whole affair fell over and sent bike, tools and “Brickie” all over the road.

After that out-of-town job was finished (about 1918 or ‘19) the bike was laid up, apparently quite thankfully, and according to the son (“Brickie 2”?), it was never used again. Certainly there was surprisingly little wear inside the engine. Its problems seemed to be neglect rather than hard use.

When located, the bike was up on its stands against the wall of a single-car garage which “Brickie 2” used for cement storage. At first sight, even in so small a space I couldn’t find it.  A shoulder high rampart of bags of cement was neatly stacked over and around it, completely hiding it.  All of these had to be removed to get sight of the machine.

The cement dust had attacked the machine badly and when we got it out, the Carbine looked like a grey ghost. The paint work, which seemed to be a home-done brush job, was badly decayed and all the nickel plated parts were flaking. The original Dunlop ‘Railroad’ beaded edge tyres were still fitted, and appeared not to have had a great deal of wear.

“Brickie 2” did not seem to care one way or another about the bike, but his sister joined in the discussions of our initial meeting in the yard without coming out of the house, and kept demanding updates of Brickie. She wanted to know how much I would pay for it. When I said that I could afford five or six pounds, she overheard and promptly called out ‘Six pounds’. This was conveyed in unmistakably ‘take it or leave it’ tones, so I took it and the deal was done. The next day Dad borrowed a Holden FJ ute from the ‘Bleak House’ estate where he worked and we collected the bike.

Despite not having a very clear idea of what I was doing, I partially restored the bike over the next few months. The engine was opened, and found to have little wear; one of the ¼” deep top piston rings was broken, but these could each be replaced with a pair of narrow 1/16” modern rings. The weight of the magneto, a heavy, US-made Dixie, together with the strain of the jury-rigged set of foot boards bearing on the magneto drive chain case, had cracked the casing. This was welded up and the nickel-plated parts, badly attacked by the cement dust, were re-plated. The steering head bearings were breaking up, so new cups were made up and new balls fitted. A rather poor paint job was done on the tank and frame.

At this point the job petered out, as I was unable to track down an affordable source of tyres or of belts at that time.  Moreover work, and later further study, took me away from home and I had very little spare time. The bike now needs a full restoration.

I actually had the Carbine running for a few strokes on its original wheels and tyres. An unappreciated piece missing from the carburettor gave it a frightening full-throttle take-off from a push start and it fishtailed down the paddock for a short distance dragging me with it. Fortunately, within a few yards, centrifugal force expanded the ageing drive belt until the fastener ripped the petrol feed out of the carburettor and brought it all to a halt. I could sympathise deeply with “Brickie 1”.

For the next few decades it passed through other hands. My father and an uncle paid me a princely £15 and shared ownership of it for a time. This was mainly a gesture of pity to an impecunious student, as neither did anything with it. I later bought it back in the late 1960’s for the same figure, but it has not been touched since other than to undergo some rust prevention.

This machine is identified as a Carbine on the advice of other collectors and as the most likely interpretation of its various features. I have not been able to get absolute confirmation of this, as no identification remained on the frame or tank. The engine was confirmed as most likely a 1912 model by the J A Prestwich company, which offered likely valve timings and expressed regret that they could be no more precise as their records had been destroyed by bombing in the First World War. (Damn Graf Zeppelin!)

In 1913 a change of ownership led to a new line of Carbine machines with Fafnir, Precision, but most frequently JAP engines of various capacities. The front forks are British-made Druids and the frame and many cycle parts were made in Melbourne by A G Healing & Co. The frame is notable for the tube gussets at the upper corners of the frame diamond; this seems to be unique to the Healing-made frames used for some local bikes.

The engine is a V-twin 7/8hp JAP side-valve, which provides far more power than the exiguous frame and brakes can cope with. It does have sidecar mounting lugs on the frame, so probably side-car use was the intention behind fitting so large an engine. The drive has no clutch or gearbox, with a V belt running straight from the engine shaft to the rear wheel. While it may once have had a stirrup brake operating on the front wheel, the only extant brake is a hard rubber block which bears on the rear belt pulley.

It is not the sort of machine to take out in peak-hour traffic.

This site uses Akismet to reduce spam. Learn how your comment data is processed.